In this gallery are a selection of business cartoons, most of which appeared in my ‘Cashtoons’ book of 1992. Many of these have also appeared in Punch, Private Eye and The Spectator magazines. Click on the small images to enlarge, so that you can read the captions.

All images ©Stan Eales. No reproducing without permission. 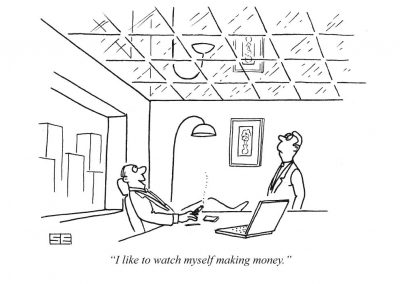 Two businessmen are in an office that has a mirror ceiling. The guy at the desk is looking up and saying, “I like to watch myself making money.” 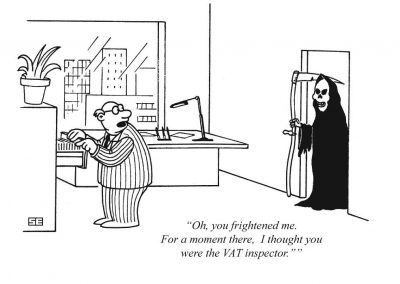 The Grim Reaper enters an office, startling a businessman. The latter says, “Oh, you frightened me. For a moment there, I thought you were the VAT inspector.” 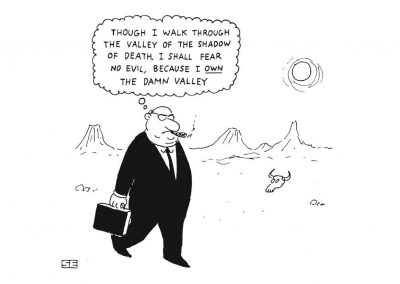 Valley of the shadow of death

A businessman is walking through a desolate landscape. He is thinking; “Though I walk through the Valley of the shadow of death, I shall fear no evil, because I own the damn valley.” 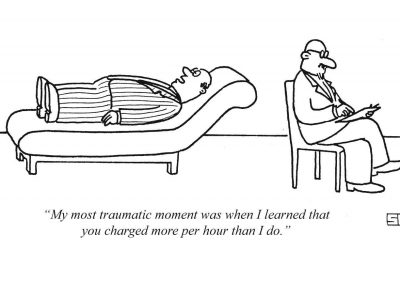 A businessman is on a psychiatrist couch. “My most traumatic moment was when I learned that you charge more per hour than I do.” 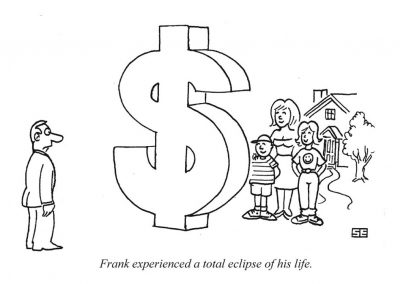 Total eclipse of his life

A large dollar sign stands between a man and his home and family. Title; Frank experienced a total eclipse of his life. 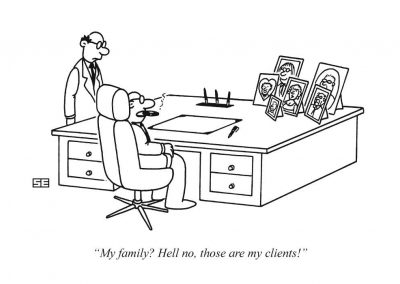 Those are my clients

Two businessmen are discussing the photos on one of their desks. “My family? Hell no, those are my clients!” 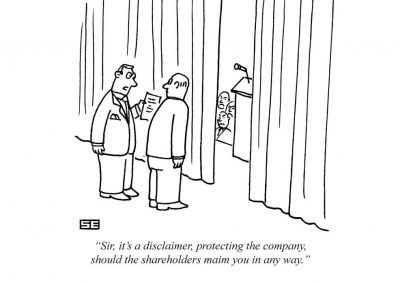 An employee is giving a CEO a piece of paper behind a conference curtain. “Sir, it’s a disclaimer, protecting the company, should the shareholders maim you in any way.” 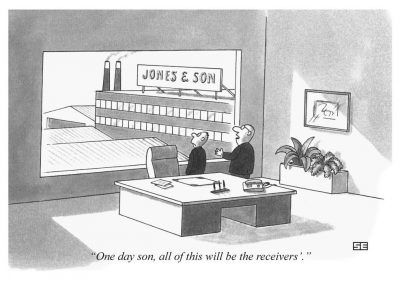 One day son_be the receivers

The office of a factory. The boss is at the window with his son. They are looking out at the factory. “One day son, all this will be the receivers’.” 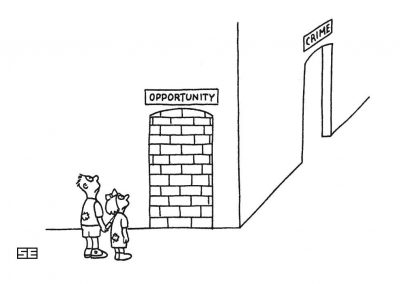 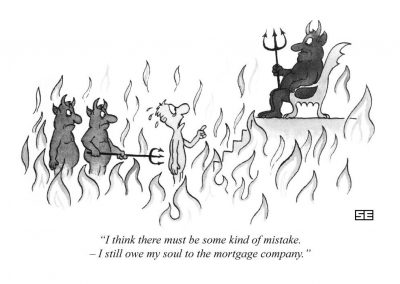 A man is in front of the devil in hell. “I think there must be some kidn of mistake. I still owe my soul to the mortgage company.” 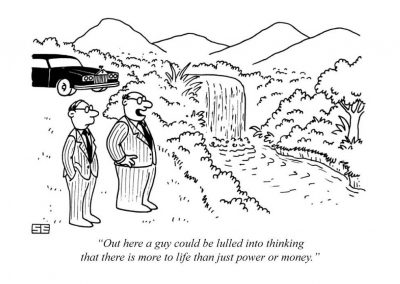 Two businessmen in the countryside. One of them is saying; “Out here a guy could be lulled into thinking that there was more to life than just power or money.” 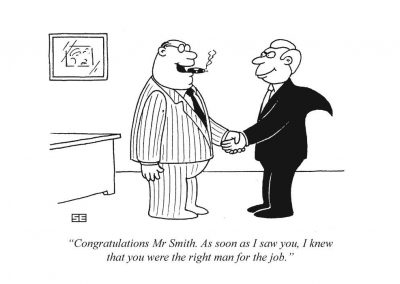 Right man for the job

A boss is shaking the hand of a new employee. The latter is wearing a suit with a shark fin on the back. The boss is saying, “As soon as I saw you, I knew that you were the right man for the job.” 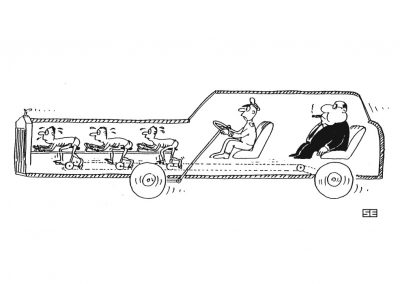 Cross section of a Rolls Royce. In the back seat, sits a fat businessman. Under the bonnet are three, very skinny people cycling furiously. 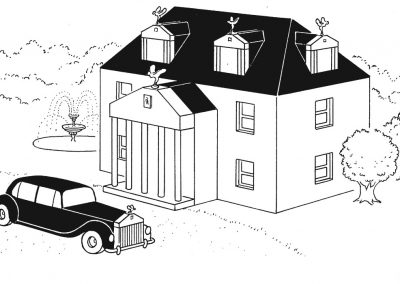 A Rolls Royve is parked outside a mansion house. The facade of the mansion and windows correspond to the grille of the Rolls Royce. 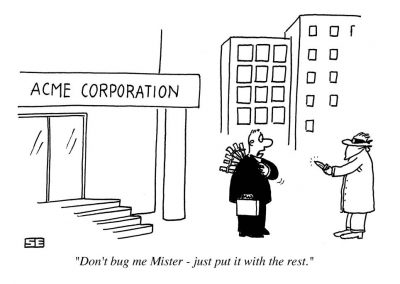 A businessman who has several knives in his back. He is about to be mugged by a man with a knife. The businessman says, “Don’t bug me Mister – just put it with the rest.” 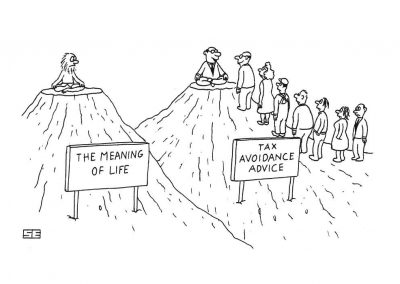 Two hills with gurus on them. One has a sign; ‘The meaning of Life’. The other has a sign; ‘Tax avoidance advice’. The latter has a long queue of people. 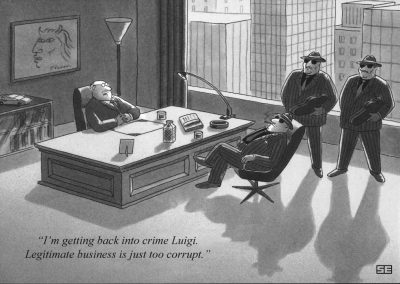 Man man is in the office of a Mafia Don. “I’m getting back into crime Luigi. Legitimate business is just too corrupt.” 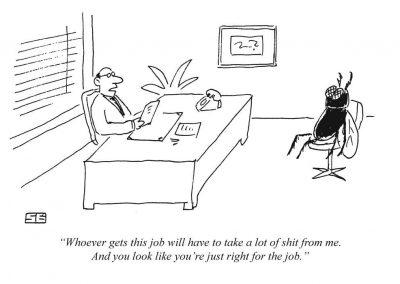 A fly is sitting in front of a businessman who is saying, ‘Whoever gets this job will have to take a lot of shit from me.” 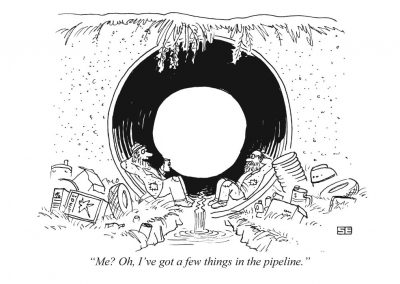 Few things in the pipeline

Two tramps are sitting in a culvert, a large underground pipe. One tramp is saying, “Me? Oh, I’ve got a few things in the pipeline.” 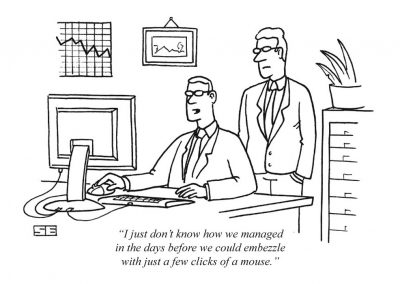 Two businessmen are sitting at a computer terminal. One is saying, “I just don’t know how we managed in the days before we could embezzle with just a few clicks of a mouse.” 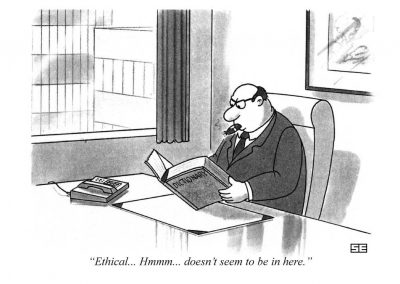 A businessman is reading a dictionay. ‘”Ethical… Hmmm… doesn’t seem to be in here.” 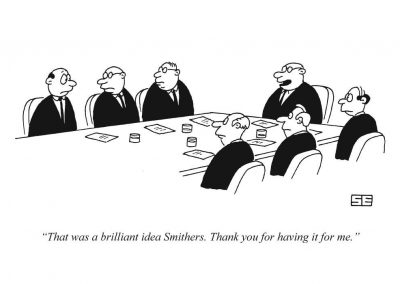 A business meeting. The boss is saying, ‘That was a brilliant ideas Smiters. Thank you for having it for me.’ 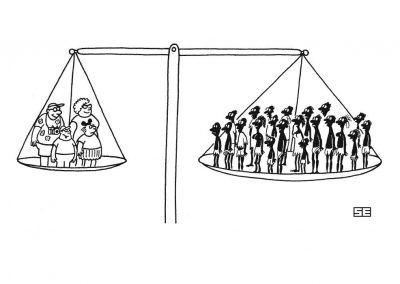 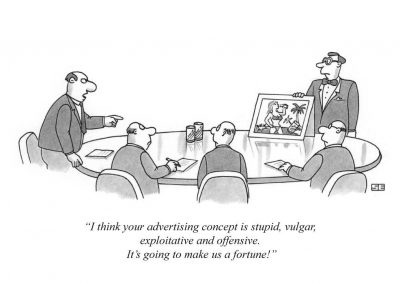 Advertising executives around a table discussing a new campaign