The cartoons in this gallery are a selection of general colour cartoons that I have had published in Punch, Private Eye and The Spectator magazines. Don’t forget to check out the other galleries on this web site. There are hidden gems all over the place.

All images ©Stan Eales. No reproducing without permission. 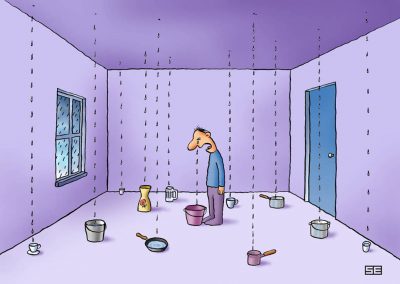 A man is in a room. Water is dripping from the ceiling in several places. His tears fall like the raindrops and collect in a bucket at his feet. 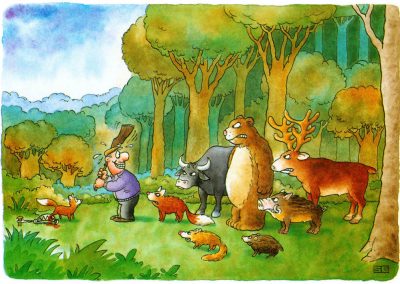 A hunter is about to club a baby fox that he has caught in his trap. A group of angry animals have gathered behind him. 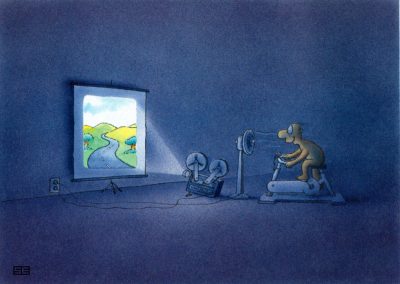 A man is on an exercycle in a darkened room. He is cycling with movie projector showing a view of a road and landscape on to a screen in front of him. 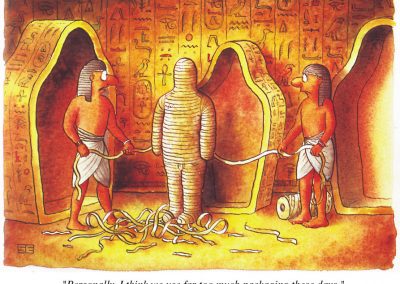 Two Egyptian mummy-makers are talking. “Personally, I think we use far too much packaging these days.” 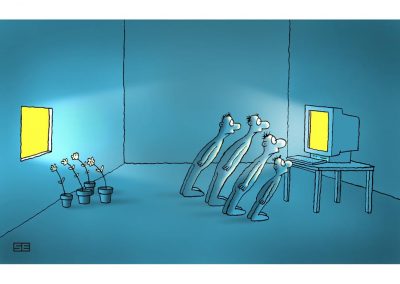 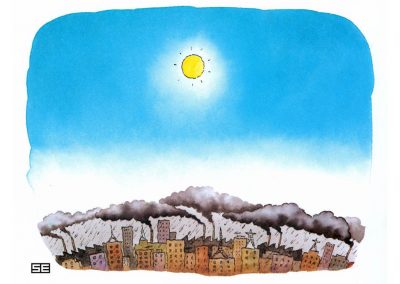 The sun shines brightly in a clear, blue sky. Beneath it is a city, over which is a layer of smog and air pollution. The light from the sun cannot penetrate the smog. 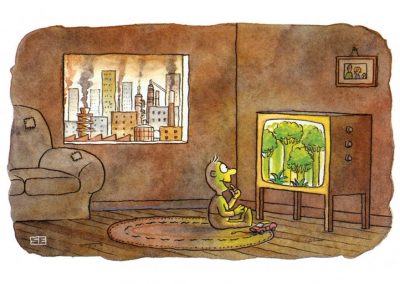 Trees on TV in polluted town

In a very polluted town, a boy sits in a decrepit room watching TV. He is amazed to see beautiful, green trees on the TV screen. 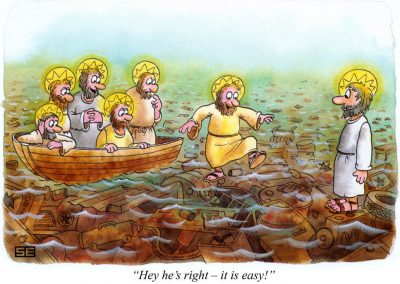 Jesus on junk in water

Jesus and his disciples are discovering how easy it is to walk on water, when the lake is full of garbage. 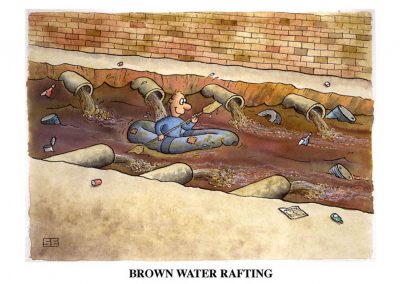 A man in an inflatable boat is heading down a polluted, brown, water channel. 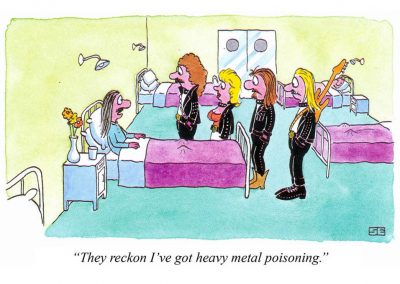 A long-haired man is in a hospital bed. He is surrounded by four friends dressed in leathers, a rock guitar and long hair. The man in the bed is saying, “They reckon I’ve got heavy metal poisoning.” 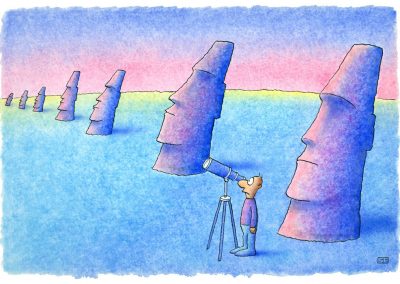 On Easter Island, a man looks through a telescope. He is trying to see the same thing that the Easter Island statues are looking at. 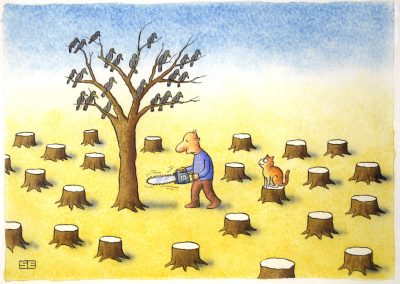 A tree is full of birds in its cranches. Nearby, a cat looks on nastily, as a man approaches rhe tree with a chainsaw. 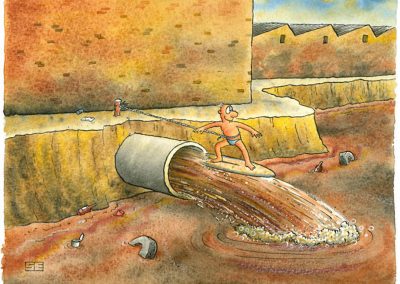 A man on a surfboard is surfing on a fast-flowing effluent pipe. 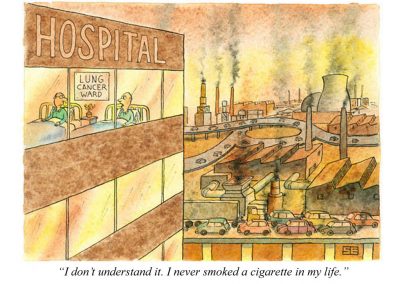 Two men are in a hospital lung cancer ward. Outside, is a very polluted city. One man is saying. “I don’t understand it. I never smoked a cigarette in my life.” 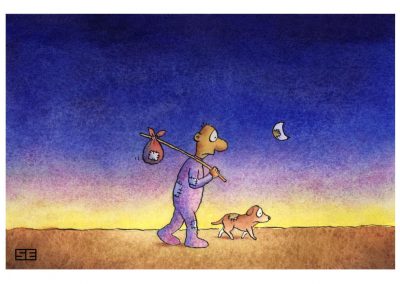 A tramp with his knapsack and dog are walking under the moon. Man, dog, knapsack and moon all have patches on them 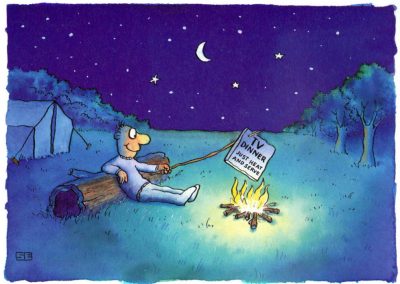 A man heats up a TV dinner over his campfire. 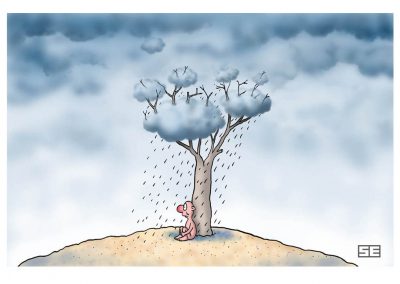 A man sits under a leafless tree, A cloud is stuck in the brainches of the tree and rains on him as he cries for his misfortune. 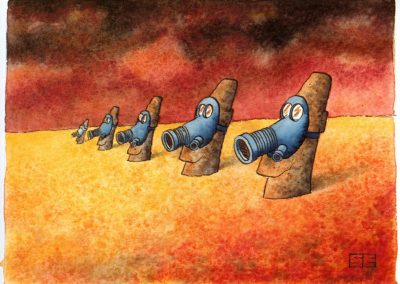 A row of Easter Island statues are wearing gas masks to protect them against the polluted air. 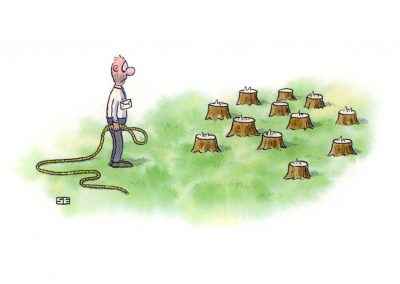 A suicidal man goes to a group of trees to hang himself. But he discovers that all of the trees have been cut down and only stumps remain.

A man stands on an effluent pipes and vomits. His vomit resembles the discharge coming out of the pipe. 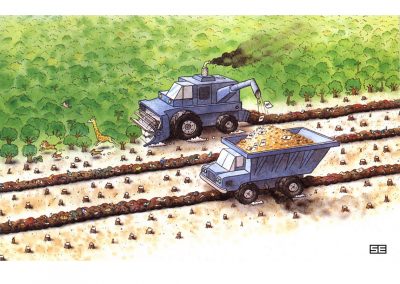 A huge combine harvestor is chomping through a rainforest. It extracts money but leaves a trail of pollution behind it. 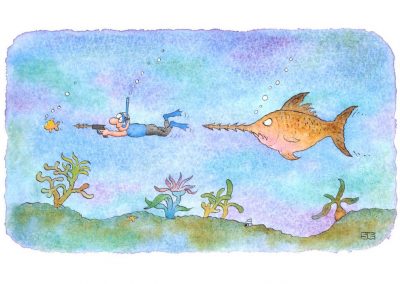 A scuba diver with a spear gun is about to shoot a small fish. Behind him, a large swordfish is about to spear him. 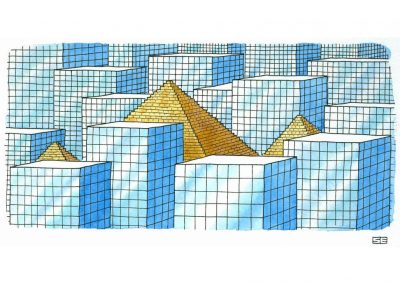 The pyramids of Cairo are dwarfed by modern, glass high-rise buildings. 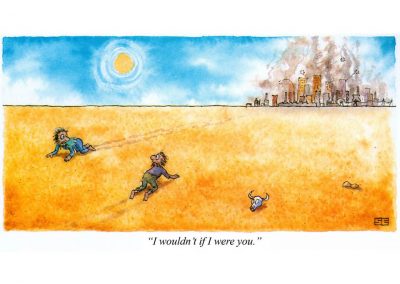 Wouldnt if I were you

Two men are crawling across a desert. One is headed towards a polluted city. Another is crawling away from it. The latter is saying, “I wouldn’t if I were you.”